Direct ignition is in a way the follow on from distributorless ignition. This system utilises an inductive coil for each cylinder. These coils are mounted directly on the spark plugs. The use of an individual coil for each plug ensures that the rise time for the low inductance primary winding is very fast. This ensures that a very high voltage, high energy spark is produced. This voltage, which can be in excess of 400kV, provides efficient initiation of the combustion process under cold starting conditions and with weak mixtures. Some direct ignition systems use capacitor discharge ignition. 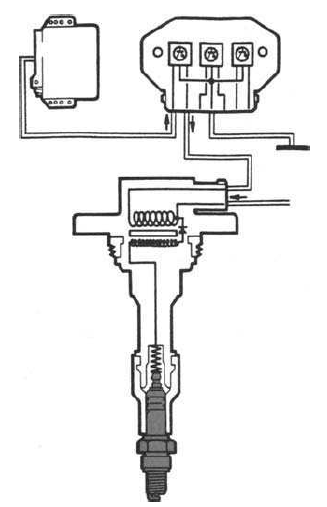 Direct ignition system.
In order to switch the ignition coils igniter units are used. These can control up to three coils and are simply the power stages of the control unit but in a separate container. This allows less interference to be caused in the main ECU due to heavy current switching and shorter runs of wires carrying higher currents. Ignition timing and dwell are controlled in a manner similar to the previously described programmed system. The one important addition to this on some systems is a camshaft sensor to provide information as to which cylinder is on the compression stroke. A system which does not require a sensor to determine which cylinder is on compression (engine position is known from a crank sensor) determines the information by initially firing all of the coils. The voltage across the plugs allows measurement of the current for each spark and will indicate which cylinder is on its combustion stroke. This works because a burning mixture has a lower resistance. The cylinder with the highest current at this point will be the cylinder on the combustion stroke.

A further feature of some systems is the case when the engine is cranked over for an excessive time making flooding likely. The plugs are all fired with multisparks for a period of time after the ignition is left in the on position for five seconds. This will burn away any excess fuel. During difficult starting conditions, multisparking is also used by some systems during 70° of crank rotation before TDC. This assists with starting and then once the engine is running, the timing will return to its normal calculated position.